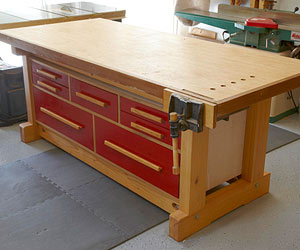 To create the end frames I used dried 2×6 stock with both edges trimmed to remove the round corners. I glued the upright and crossmember pieces together, and later clamped the laminated uprights to the laminated crossmembers to check the fit. Then, I marked the mortise locations on the four 3″-thick uprights. 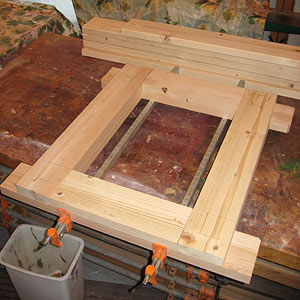 Easy drill-press mortises
To create the mortises where marked on Slide 2 on each laminated upright, I bored within the marked perimeter lines with a Forstner bit, using a back block to prevent chip-out. After hogging out most of the material with the flat bottomed bit, I used jigsaw and a 1″ chisel to finish forming the through mortises. 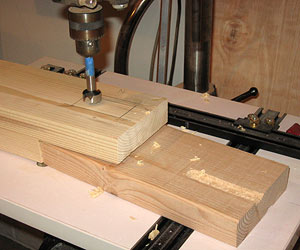 The completed end
With the mortise completed, I glued the uprights to the crossmembers to create the end frame shown. 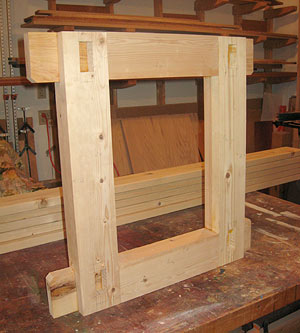 Finish the feet
Next, I cut and glued in place the four short end pieces that mate with the crossmembers and fit flush against the uprights. I also cut and glued small strips to the bottom of the assembled end frames to create a foot on each bottom end of the end frames.

Next come the stretchers
To allow for ease in assembly and disassembly of the bench, I created an opening in each of the four stretchers, allowing me to bolt the tenoned stretchers to the end assemblies. 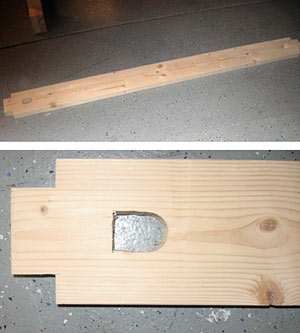 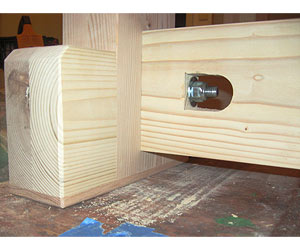 The completed stand
Shown is the assembled workbench framework. 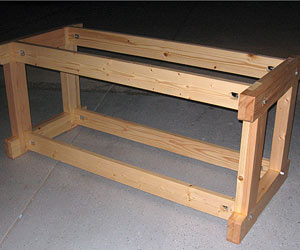 Simple plywood storage
For the storage section of the workbench, I cut pieces of 3/4″ birch plywood to create a snug-fitting box to fit within the opening in the ass 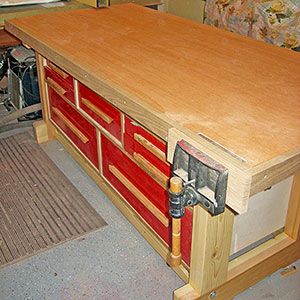 embled base. I banded the edges of plywood with solid stock to hide the plies. 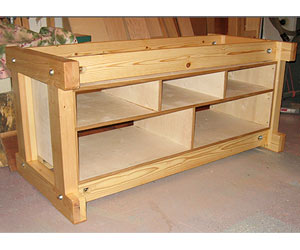 Finishing touches
For the drawers, I used 3/4″ plywood for the front, back, and sides. And for the drawer bottoms I used 1/2″ plywood. Solid oak was the wood of choice for drawer pulls. The drawers slide out both sides of the workbench allowing me to access tools and accessories when working on both sides of the bench. For the top, I used a damaged solid-core door for a local builder.